On this week’s show I took the iRacers Lounge on the road to do a spot interview with Kyle Busch and Travis Pastrana at the Nitro Rallycross event at Wild Horse Pass. The World of Outlaw Championship Series began this week and we crown Champions in the Dallara iR01 Championships and the World Rallycross Championships. All that plus new hardware and what’s coming up for Black Friday.

SimCoaches offers the realistic sim racing equipment you need to win more races online…. It is designed for real racers… Hydraulic construction makes them feel just like the real thing. High-Quality Construction, 100% Leak Proof, and Lifetime Warranty are the key features with these pedals. And, they look absolutely amazing… Check out simcoaches.com and use the coupon code IRACERSLOUNGE to get 5% off your purchase. Simcoaches.com is your ticket to feel like your actually sitting behind the wheel of a car. Drive harder and stay on the limit longer…

Getting iRacer interviews for our listeners at Nitro Rallycross

Has iRacing been in Norway?

Box This Lap’s website asked if iRacing has visited Norway. If the rumor is true they speculate that the most likely tracks to make their jump to the simulator would be Valerbanen or Rudskogen

On the iRacing official Instagram, they posted a video of member D J McCabe making his way from 15th to first at Talladega

BIGGEST sale of the year

Black Friday sale reminder for the biggest discounts of the year

E-Sports Weekly is an online, newspaper style weekly periodical developed by Jay Scalice and partner Brayden Goddard for an added level of immersion for the iRacing enthusiast.

The Short History Of iRacing

Robin Truswell put together a forum post with a brief history of iRacing including the first known iRacing review video on Inside Sim Racing with, now host of the Sim Pit YouTube Channel Suan Cole.

How would you like these stats from Gregor Huttu in the Skip Barber series in 2008?

Who Deserves a SIMMY

You can vote now for the winner of the VCO Simmy award for 2021 year’s best eSport SIm Racer as well as other sim sport catagories.

Rob Crouch has posted the stats for the 10 hours of Suzuka special event.

In Round 9, the penultimate round of the Force Dynamics Dallara iRacing Grand Prix World Championship at Suzuka, Maarten van Loozenoord won his 6th of nine races to close to within 2 points of series leader Peter Berryman with one race at the Hungaroring to go.

Peter Berryman picked up his third win of the season and the title of Inaugural Champion of the Force Dynamics Dallara iRacing Grand Prix Championship at the Hungaroring Circuit after a tough points battle with Marten van Loozenoord, who finished the race in third. \

In 2022 the Apex Sim Centre will open to, “allow our pro athletes the chance to work together and maximize results like never before. The best preparation, equipment, and software thanks to our partners will help find the marginal gains needed at the top level, while providing a venue that will be open to use by the Sim Racing community.” according their press release.

Esports Driver of the Year

Traxion.GG also is taking your votes for the Esports Driver of the Year to be announced on December 19th at the AutoSports Awards

In a Tweet from Marshall Pruett, Corvette Racing has confirmed that they are working on a GT3 program, which always makes us question….

Registration opens on November 17th, so start your practice runs now. We’ll see you on Twitch on December 1st! #LCQC

Registration is now open for this 1 time only iRacing Pre-approved live broadcasted event November 24th race starting at 7:30 pm eastern in the free Global MX-5 cars at free Legacy Michigan track. There will be no cost for this event.Please register ASAP because spots will be limited. This event is for family members of iRacing account holders who are 15y/o and under.***To register send a league application to 3f Media league # 7677 and include your family members name and age in the comments of the league request.*** If you have any questions regarding this please direct them to me 3F Media and I will be more than happy to answer them. Have a blessed day and remember “In a world where you can be anything, be kind.”

Git’r Done Racing is a new iRacing League started by Pete (KokoPuffs) Kopko that is recruiting clean, respectful racers looking for good comradery and great racing. They are running races in the Gen 6 Cup Cars on Sunday nights at 9PM est. Drivers must be a minimum of 25 years old and have an iRating of under 3500.

Hall – p27 was running 20ish last pit stop made a mistake rushing in, Mike was out of gas, wasn’t sure if I could pass him or not and in the process I shifted into 1st and hurt the engine. 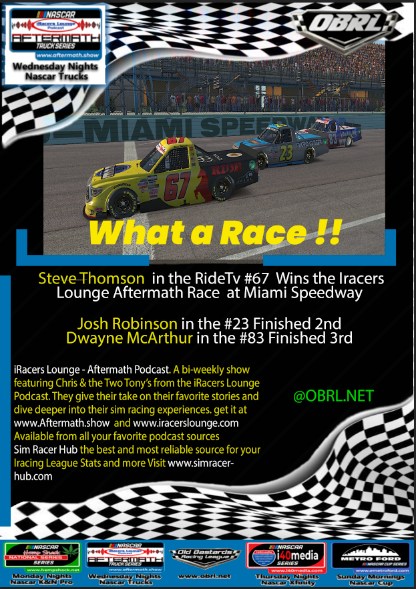 Tyler P 12  It was fun racing and I had a blast. My last race (hopefully) with the OG27.   I’m excited for the Lady n Black next week.