This week on the show, the final unsigned Coke Series drivers find their home. We recap the final race of the iRacing World of Outlaws season and crown a series champion. And is the Next gen cup car worse than it was before?

SimCoaches offers the realistic sim racing equipment you need to win more races online…. It is designed for real racers… Hydraulic construction makes them feel just like the real thing. High-Quality Construction, 100% Leak Proof, and Lifetime Warranty are the key features with these pedals. And, they look absolutely amazing… Check out simcoaches.com and use the coupon code IRACERSLOUNGE to get 10% off your purchase. Simcoaches.com is your ticket to feel like your actually sitting behind the wheel of a car. Drive harder and stay on the limit longer…

Elliot Sadler eSports announced the acquisition of driver Liam Brotherton. Also, they announced that they will be partnering with Next Level Racing as their exclusive sim chassis provider.

Spacestation racing will be returning with Kyle Peddle and Allen Boes

Casey Kirwan wins the Coke iRacing Clash at the Colosseum

The Tag Heuer Porsche Supercup Series will return this Saturday, February 5th at the Hockenheimring with $200,000 prize pool.

iRacing posted a Tweet recognizing that there is a know issue with the UI not allowing races to show up and direct user to use the website until the issue is resolved.

Nick Neebon posted a video on his YouTube Channel criticizing the next gen car noting the snappy loose conditions that are prevent in mile and a half tracks.

iRacing member Isaac Lockhert noticed while racing the Next gen Cup car at the Charlotte roval course that he actually had to back up his break points compared to to Gen 6 car and blamed poorer brake performance. Staffer Matt Holden posted a reply with his explanation of why this is.

There’s a lot behind the “curtain” that has to be considered between the two cars. First and foremost, the NextGen brakes do provide more stopping power at their peak than the Gen 6 car, but there’s other stuff going on. Mason is right that the Master Cylinders are intentionally set to be larger than optimum, which basically means you can go to 100% brake pedal travel without lockup on initial braking. This helps with people who are more arrive-and-drive since front lockups tend to be harder to recover from than just a softer brake pedal. Reducing MC size will increase line pressure and cause the brakes to bite harder, but can more easily lock up.

Also, NextGen cars have the temperature system enabled on the brakes while the Gen 6 did not. This basically means the G6 brakes are always at optimum temperature, the NG brakes start too cold, thus don’t have as much power as they could, and will start fading with excessive heat. It’s actually quite difficult to get all four rotors to run in the optimum temp range (usually the front rotors overheat when the rears are optimum), so brake performance can suffer slightly. There’s also some engine braking differences between Gen 6, but all-in-all we’ve gotten feedback from the real drivers that the performance is accurate on the NextGen. The most common thing I heard from real drivers was that the Gen 6 brakes were way too powerful than the real things.

Broke A$$ $imracing posted a series of videos using some imaginative ways to replace a steering wheel.

The iRacing track scanning vehicle was spotted at Kern County Raceway Park a half mile oval in Bakersfield California that hosts the Whelen All American Series and K&N Pro Series West. It also sports a 1/3 mile clay track in it’s facilities.

Reminder – Yes we have F1

iRacing Posted on their YouTube Channel a video of member Jarl Teien posting a 1;23.65 in the Mercedes Formula 1 Car at Suzuka

The iRacing Nos Energy Drink World of Outlaws Sprint Car series closed out Monday at the Dirt Track at Charlotte. Coming into the race Cameron Merriman held a 13 point lead over 3 time returning champion Alex Bergeron with James Edens 19 points back, third in the points.

Blake Matjoulis was fast in qualifying and won heat number one and earned the feature pole. Merriman was second fastest in qualifying, won his heat and would start on the outside of the front row for the feature.

Meanwhile Bergeron did not have great qualifying effort. Bergeron qualified 21st, started 6th in his heat, and managed only to make his way to third meaning he would start in the fifth row of the feature.

That put Merriman in great position since Bergeron would need to finish at least 5 spots ahead of him to take the championship.

After the flag dropped, Merriman was able to get by Matjoulis 6 laps into the race running the high line around the track. He stayed comfortably ahead of the field while Bergeron charged all the way up to p5.

With the race staying green, the only way he could loose the championship is of he made a major mistake like happened at Fairbury. But no, Merriman stays clear of lap traffic and take his only race win of the season and claiming the 2022 Championship and the $10,000 prize.

Alex Gustafson posted in the forums that the iRacing partners at EasyAntiCheat (EAC) recently released a new client-side version update that needs to be present in order for you to join Races. Many of you may have received this update automatically, but if you have been unable to join events lately, these steps might solve your problem:

Do you have the same sim racing bad habit as me? [Hall]

Dave Cam on his YouTube Channel was shocked to see that he was turning faster times at Bell Isle with one foot for throttle and braking than with two. After checking his telemetry, he figured out his mistakes and asks if you might be having this habit as well.

The Rowdy Energy Monday Night Racing Pro Series Finale Presented by Market Rebellion will be brought to you LIVE at the Carolina Esports Hub for a first of its kind event featuring the best real life & sim drivers alike.

(Registration opens 1 hour prior to the event)

Prelude to the Daytona 500

Samsung posted a video on TikTok of the Samsung Odssey Arc monitor.

Why I Ditched My Triple Screen Sim Racing Setup

Chris Haye Simracing posted on his YouTube Channel the reasons he ditched his triple screen setup for a single monitor. Most of his reasoning revolved around video performance and video capturing, budgeting for 4k triples

itchie.diz posted a short video on TikTok of his 80/20 composite rig that features an enclosed hood and roof complete with window netting

Sim Coaches have managed to engineer the first purpose built hydraulic cylinder for sim racing. where they have added more o-rings and tightened the tolerances from other brands to ensure that they are completely leak proof.

RaceKit Simulators will sell the plans and instructions to build plywood simulators from $25. Designed and developed in New Zealand.

Hall –  p wrecked out, not of my own doing, disappointed end to season.  Finished 8th in points. 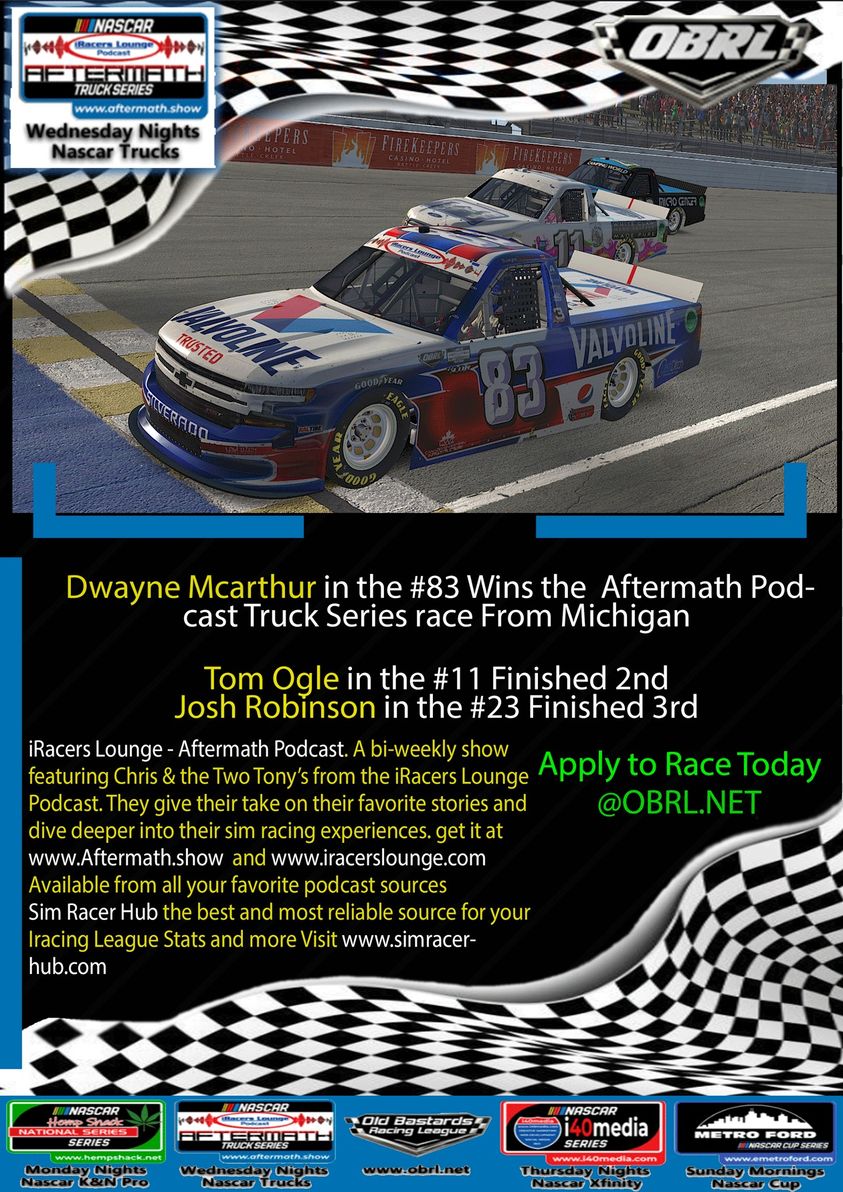 This week on the show, the final unsigned Coke Series drivers find their home. We recap the final race of the iRacing World of Outlaws season and crown a series champion. And is the Next gen cup car worse than it was before? So sit back, relax and join us on the iRacers Lounge Podcast.