After a week of for the holidays, we’re back with all of the info you’ve come here for. We’ll see how iRacing is supporting their highest tech race car ever, the Mercedes W12 F1 car. We’ll see how Dale Earnhardt Jr. is spending his time in iRacing and hardware products that may be just what you’re looking for.

SimCoaches offers the most realistic sim racing equipment you need to win more races online…. It is designed for real racers… Hydraulic construction makes them feel just like the real thing. High-Quality Construction, 100% Leak Proof, and Lifetime Warranty are the key features with these pedals. And, they look absolutely amazing… Check out simcoaches.com and use the coupon code IRACERSLOUNGE to get 5% off your purchase. Simcoaches.com is your ticket to feel like your actually sitting behind the wheel of a car. Drive harder and stay on the limit longer…

Next, they posted another video explaining how to launch with the F1 clutch system

How To Setup The Car

Finally iRacing covers on their YouTube Channel what you need to know about setting up the Mercedes AMG W12 F1 car.

An all encompassing User Manual for the F1 car was also released so you can learn the ins and outs of iRacing’s most advanced race car.

Simracing is not just a game for Max Verstappen

In an interview on YouTube, F1 World Champion Max Verstappen was asked what he does when he not in the car, and his answer was Sim Racing. He talks about his Red Line racing Team and working with technique and setups in sim racing.

How to Make iRacing MORE FUN!

Wil Ford at Boosted Media posted a video of how to make iRacing Way More Fun. From etiquette to learning from faster drivers and racing smarter to learning the limitations of the software itself.

Wrecked by Dale Jr and I Love It!

Who’s ever excited to be wrecked out in an iRacing session? We’ll that depends on who is doing the wrecking. Well, it made Chris Palmer happy when he was taken out by a wrecking Dale Earnhardt Jr.

iRacing posted a video on Twitter of Dale Earnhardt Jr going on a wild ride from 15th to 4th in the last 2 laps of the Firecracker 400 hosted by eRacer_gg.

What do you do when you lose to Dale Earnhardt Jr in a photo finish? You blow up a photo of it and give it to your grandparents according to @UltraRacingPhil

NASCAR will ditch the 550

To the cheers of many, Bob Pockrass reports that Nascar will ditch the 550HP package in favor of a new 670HP package. Many iRacers await an update.

Daison Pursley has begun his return to racing after a serious spinal cord injury during a USAC midget race at Arizona Speedway thanks to Chad Wheeler and Johnathan Davis and WR1 Racing Simulators.

Wanna Give Up Some iRating?

Robby Swan III posted his thoughts and experiences of the asphalt sprint cars and why it may be the most overlooked car in the sim.

Kollin Keister will return to the iRacing eNascar Coke Series by winning the Road to Pro Contender series Championship. He will be joined by Elliott Sadler eSports driver, and soon tot be series newcomer Liam Brotherton.

Coke Series driver Matt Bussa shows off the video of his photo finish win in the 1987 Winter iRacing Series.

More perks for the 2021 Coke Series champion, a Coca Cola cooler showed up for the holidays.

Circuit de Spa is getting some updates for the new race season.

‘Twas the Racing Sim Before Christmas

‘Twas the Racing Sim Before Christmas a simracing themed poem for the holiday season.(original poem by Clement Clarke Moore)

‘Twas the night before Christmas, when all through my nest,
Not a sim was playing, not even Wreckfest;
The wheelbases were all left turned off and bare,
In hopes that a new wheel soon would be there.

It’s probably time to retire to my bed,
But ideas for setup tweaks are dancing in my head;
As mamma looks at statements, her finger does tap,
You reminder her it came out of a bonus; “I promise, no cap”;

From force feedback clipping, there arose such a clatter,
I hit the Escape key, to see what was the matter.
Into the settings, my cursor flew like a flash,
I would get a DD, if I only had the cash.

I mapped ECU buttons, to change on the go,
What that actually does, I only pretend to know,
When, what to my sim racing eyes should appear,
A heavy square box, but what type is not yet clear,

A new Simucube wheel sure would be slick,
Or a DD2 base, those things are sick.
But my expectations will still need to be tame,
Because my gift might actually be something lame;

With new gear across the finish line I would fly,
Up high on my podium, to the rookies I’d say bye,
I’d feel so cool, with gear shiny and new,
Come to think of it, I might need racing gloves too.

Thinking of tin tops, yes cars with a roof
I can’t focus on dinner, my attention is aloof.
Dreaming of my RSR driving round and round,
There is nothing better, than that sweet Porsche sound.

A nice racing boot would look nice on this foot,
But if none are coming, then my socks will stay put;
On Boxing Day, the Nordschleife I’ll attack,
Using cars I bought, in a DLC pack.

Driving a stickshift will someday be merry,
But learning to blipshift sure can be scary!
What’s the best looking sim car, I do not know,
But it definitely isn’t the GT4 X-Bow;

Simming an F1 car can be so much work,
Each time it oversteers, the steering gets a jerk,
What’s my next piece of sim gear, who really knows,
So with that said, I’ll bring this poem to a close;

May your new sim gear be clean as a whistle,
May your car on track be fast as a missile.
May your holiday sim racing be full of delight,
HAPPY CHRISTMAS TO ALL, AND TO ALL A GOOD-NIGHT!

What 2021 sim racing accomplishment are you most proud of?

At the close of the year, iRacing asks what sim racing accomplishment are you most proud of?

Here is a closer look at our #WilliamsEsports Lounge!

The Williams eSport Lounge shows some closer look photos of their eSport facility.

Alex Bergeron wins qualifying, heat one and the feature to take his first victory of the season and the points lead over Trevor Merriman.

Just under 2 weeks til Freeky Fast Broadcasting will be hosting a charity event at Daytona. This charity event is to help raise awareness, and hopefully donations, for juvenile type-1 diabetes. The event will be a 6 hour endurance race at the Daytona Road Course, with the cars used in the iRacing Official 24hr race. this event will be held on January 7th, 2022 at 8PM EST. Additional information can be found at the links below. We are at 30 of the 60 possible teams signed up with 13 days before the race.

The iRacing Roar is back for 2022 as a solo endurance event to kick off the 2022 special events calendar. This 2.4 hour event will feature GT4’s, Touring Cars, and the Global MX-5.

The Daytona 24 is a 24 Hour endurance race held at Daytona International Speedway in Daytona Beach, Florida.

So so far we will have a gen 5, arca, cot and Xfinity 20 lapper at old daytona and a 20 lapper figure 8 with some multi class cars

Toyo Sim offers shifters, handbreaks and more for your rigs.

Fanatec reveals its new BMW M4 GT3 Podium hub which, sold out in minutes after its introduction.

Fri open: N wilkesboro Ellis –   p15 – I was fast and was able to move forward and eventually took the lead and lead some laps. I was involved in several of the cautions though and my incident count was high. 30 to go I did my last stop for tires while others stayed out. As I was coming back up through the field with about 10 to go I got wrecked again and had to do a drive-through penalty.

Hall – P. 8, ran well, had trouble early with SRA not beeping, lost a lap as a result, got it back, lost again after getting caught up in wreck, got it back.  Raced to 8th

Ellis – Trade off dallara dash at charlotte and pickup cup at daytona, most of the day, saw kyle busch in one race 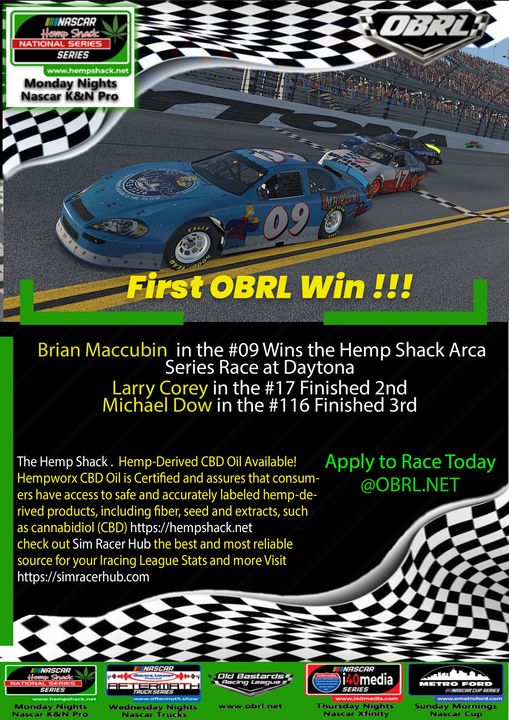 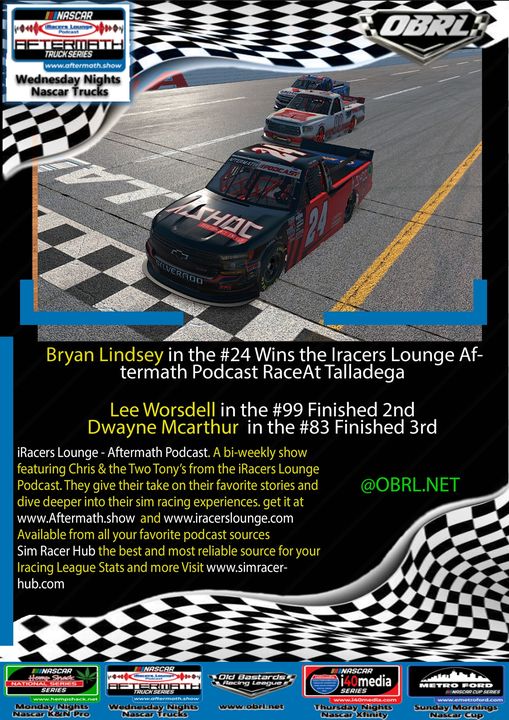 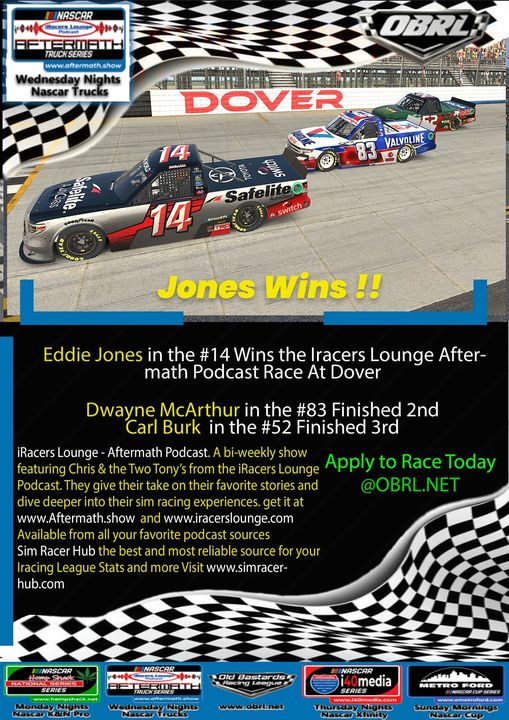 After a week of for the holidays, we’re back with all of the info you’ve come here for. We’ll see how iRacing is supporting their highest tech race car ever, the Mercedes W12 F1 car. We’ll see how Dale Earnhardt Jr. is spending his time in iRacing and hardware products that may be just what you’re looking for. So sit back, relax and join us on the iRacers Lounge Podcast.